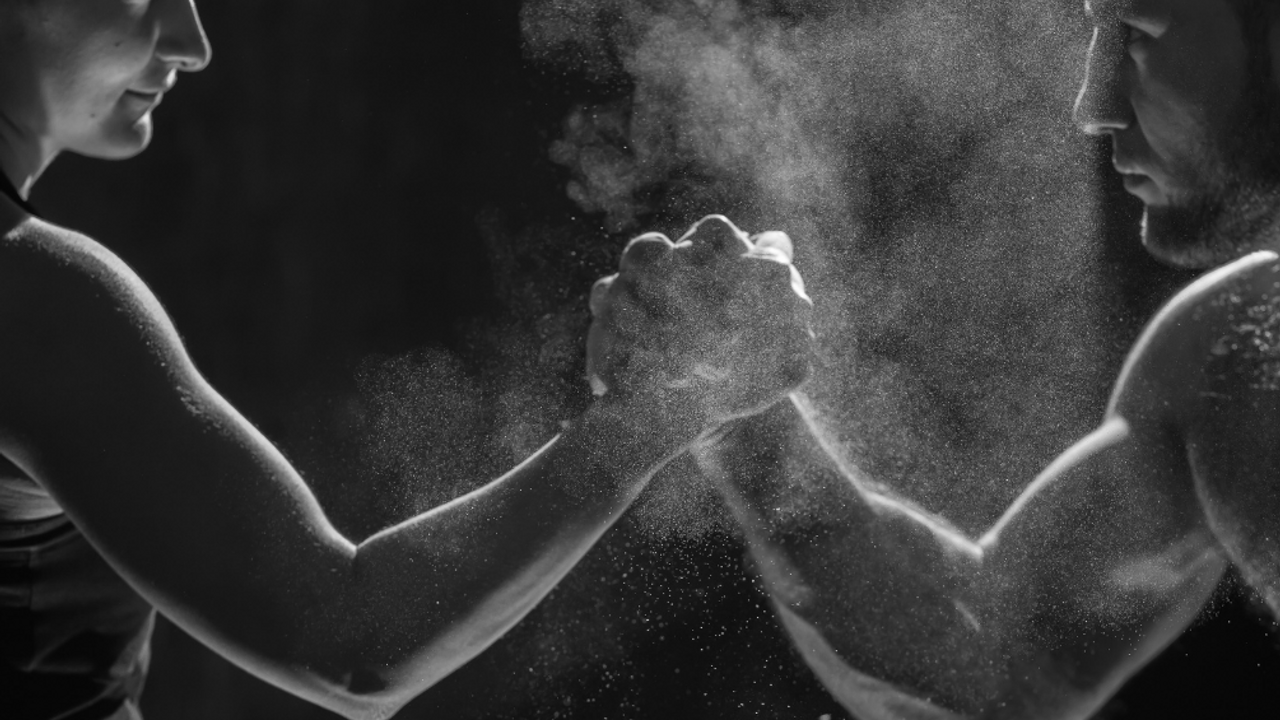 The difference between men and women is a topic that has been wildly analysed, researched and discussed, especially with regards to Strength Training (ST). Whilst men and women have anatomical and hormonal differences, both males and females partaking in ST can greatly increase their Strength (S) and muscle size. Nevertheless there still remain many misconceptions about how both genders respond to training and the adaptations they receive.

Earlier research conducted by Cureton et al. (1988) and Staron et al. (1994) found that in response to ST, although absolute changes in Muscular Hypertrophy (MH) and S were far greater in men, the relative changes in both MH and S were similar between men and women. O’Hagan et al. (1995) continued this research with respect to MH, however, found that females tend to have much greater increases in relative S than males. More recent studies conducted by Judge & Bourke (2010) and Salvador et al. (2009) looked into recovery and fatigue resistance when comparing adaptations to ST across both genders. They indicated that females tend to recover quicker than males. However this was later refuted with claims that gender, in fact, has no influence on fatigue resistance (Ribeiro et al., 2014).

Of course, one main difference between men and women is the women’s Menstrual Cycle (MC). As a result, research has looked into the effects of the MC to see how it can affect ST and their relevant adaptations, as well as consequently how to adequately alter training and load around the cycle. Reis et al. (1995), Markofski & Braun (2014), Sung et al. (2014) and Wikstrom-Frisen et al., (2017) have all shown that ST parameters may need to be altered for females depending on what stage of their MC they are on. These studies show that there could be a potential benefit for increasing training frequency and subsequent load during the first two weeks (follicular phase) of the MC.

Due to some of these conflicting arguments and gaps in the literature, this literature review will determine if there is a need for some adjustments to ST protocols for men and women in order to optimise adaptations.

In this section there will be a comparison between males and female adaptations across three overarching themes. These include STRENGTH and HYPERTROPHY, FATIGUE RESISTANCE and MENSTRUAL CYCLE CONSIDERATIONS. In comparing these three areas the hope is to develop a more conclusive reasoning for the need to, or not to come up with a set of revised ST parameter for both genders.

When comparing the S and muscle fibre characteristics across both genders, Miller et al. (1993) found that women were 52% as strong as men in the upper body, and 66% as strong as men in the lower body. They also found a significant correlation between S and muscle cross sectional area, meaning that the greater gender difference in upper body strength can probably be attributed to the fact that women tend to have a lower proportion of their lean tissue distributed in the upper body when compared to that of men.

This corresponds with O’Hagan et al. (1995), who also summarised that whilst muscle size increases were similar in response to ST between genders, it was females that had much larger increases in relative S. This makes perfect sense given that females tend to start with much lower levels of muscle mass when compared to males. Further correlations can be seen by later research conducted by Salvador et al. (2009) who also found greater increases in relative S in women as demonstrated by a greater increase in reps in both upper and lower body exercises when compared to males. A trend later continued by Ribeiro et al. (2014) who found that women had much larger relative increases in S than men, especially in the bench press. This further strengthens the evidence to suggest that because females have lower initial starting muscle mass, greater relative S gains can be made by them. Some conflicting opinions about this still exist in the literature. For example, Gentil et al. (2016) found no significant difference existed in relative S gains between males and females following a 10 week ST intervention. The study did not however measure MH gains alongside S gains so it could be argued that because starting muscle mass was not measured and only participants’ weight was taken into account that the relative S results obtained could have been more accurate if both weight and muscle mass were measured, therefore taking into account participants’ initial fat and fat free mass.

The question remains about how females are able to induce similar hypertrophic responses to ST interventions as males. This poses more questions with regard to neural adaptations. Cureton et al. (1988) hypothesized that if relative S increases are similar for both genders, with MH greater for males than females, there is a suggestion that neural adaptations to weight training are greater in females than males. This however had already been shown incorrect by Moritani & DeVries (1979) who demonstrated that neural adaptations to ST were equal between both genders. Given that Cureton et al. (1988) then went on to find that there were no differences between genders with regards to MH after ST initiatives, the question still remains.

Cureton et al. (1988) also acknowledged that previous findings that found differences in larger amounts of muscle mass amongst males than females had been attributed to higher levels of blood testosterone. It has been demonstrated that testosterone may not in fact play as important a role with regards to female MH as established by MacLean et al. (2008). MacLean et al. conducted studies on mice and found that Growth Hormone (GH) and Insulin Like Growth Factor (IGF-1) may potentially contribute to MH responses found in females. Vandenberg et al.’s (1996) earlier findings suggested that GH in females may in part play a similar role that testosterone plays in men. More research conducted by Velders & Diel (2013) has found that the female sex hormone estrogen also plays an important role in stopping muscle loss and helping muscle repair. These point toward a few reasons why females, having significantly less testosterone than males, are able to grow muscle at the same rate as males, as shown in all (omitting 2 which did not test MH responses) of the studies in table 1 above. Based on previous findings acknowledged by Cureton et al. (1988), higher testosterone levels in males could explain initial size differences in muscle mass when compared to females. This is further exemplified by Miller et al. (1993) and gender comparisons of S and muscle fibre characteristics mentioned above. However still bids the question, does testosterone have as significant effect on rates of muscle growth as previously thought? Further research needs to be conducted in this area to gain a more conclusive stance.

Whilst it has been demonstrated that similar gains in MH can be seen across both genders and a greater consensus that females have larger increases in relative S than males, their response to fatigue during ST protocols is still yet to be discussed. Research conducted by Salvador et al. (2009) found that females partaking in an 8 week ST program demonstrated a greater adaptation in the total number of repetitions of their relative S at 8-12RM in the Squat, Bench Press and Arm Curl combined when compared to males. This indicated a higher level of Fatigue Resistance (FR) in the female subjects. Salvador et al. discussed a possible reason for this including the fact that females have higher proportions of more fatigue resistant type 1 fibres and larger muscle creatine content. It was also stated that due to males having a greater motor unit activation frequency than females, it could lead to them to fatiguing faster.

Further studies completed by Lawrence & Jeanmarie (2010) support this increased FR in females using research that compared the results of FR for a high intensity bench press program conducted over 8 weeks. It was shown that males had a decrease in 1RM from 4-24 hours post training whereas females showed no decrease in S regardless of recovery time. Interestingly, longer studies conducted a 16 week ST program and found that afterwards although females demonstrated greater relative S increases when compared to males, FR was the same for both groups (Ribeiro et al., 2014). This refutes previous literature supporting that fact that females recover faster than males.

In reviewing these studies there seems to be a correlation between FR among young women in the initial stages of a ST program. However, these may level out as the length of the program increases. More research needs to be completed to determine if greater FR in females can be achieved in longer training programs as well as short term when compared to males.

Coaches or trainers could potentially look at the benefits of increasing training frequency and subsequent volume load amongst female clients starting out in order to take advantage of their greater levels of FR shown during this time. Similarly it could be beneficial to take advantage of faster recovery rates during follicular phase of the MC by increasing training frequency and subsequent volume during this phase. Whilst also considering the potential benefits on slightly decreasing training volume load and potential frequency during the luteal phase of the MC. However, the decision as to how much of an increase or decrease should be made on a person by person basis. Training history and the individual’s ability to adapt to training stressors and subsequent recovery and adaptation should be established first before attempting to design a program around their MC.

Most studies were completed on untrained and some moderately trained subjects from anywhere between 8 weeks and 9 months. To gather a more conclusive understanding on some of the gender comparisons of ST adaptations, more longitudinal studies are suggested. More research is also needed comparing ST adaptations between well trained (minimum 3-5 years’ experience training and/or competing) male and female strength athletes.